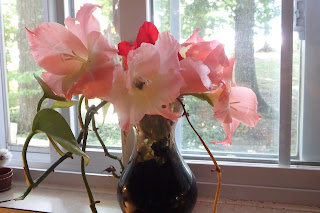 With Fall's arrival this past week I found myself doing cozy things. The last gladiolas of summer begged to be picked. The cooler days made us hungry for cornbread baked in an iron skillet. (Somehow it tastes better done this way.) Spent more time in the studio because the evenings are arriving earlier.   Afternoon walks provided lots of treasures to gather. These will be fun to sketch. The wildflowers this time of the year are lovely to cut and dry.  They make delightful arrangements to hang or display in baskets.   Lastly a pleasant book to read before bedtime makes a good ending to a day. These were some of the cozy things I did to welcome autumn. Maybe you will share yours too. Take care and have a blessed week. Hugs Debbie "...the kingdom of heaven is like the owner of a house who brings out of his storeroom new treasures as well as old."  Matt:14:52 b (NIV)
8 comments
Read more 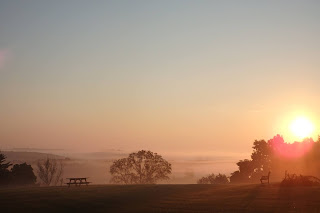 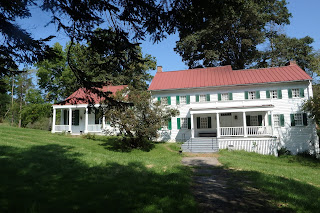 This past week hubby and I took a short road trip to view Alexander Campbell's home.  It is located in Bethany West Va. Alexander was born Sept. 12, 1788 in Broughshane, County Antrim, Ireland. He was a minister that was ordained in the U.S. and joined his father Thomas Alexander in establishing what is known as the Restoration Movement. Through this movement three major groups were formed.  They are called Churches of Christ, Christian Churches, and Disciples of Christ. In addition there are International Christian churches as well in Europe, Canada and Australia.  There are tours offered at certain times to go through the mansion but it was not open for viewing the day we visited.  We were able though to enjoy the grounds and see his library.    This building was where Alexander spent his time studying and writing his sermons and books. The  marker at the right was posted in the window of his study which spoke of fifty-nine volumes he wrote. We also visited the family cemetery th
12 comments
Read more 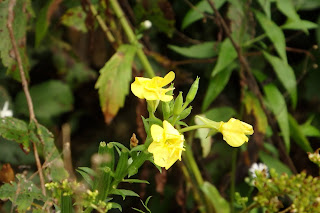 Tomorrow marks the last holiday of summer in the USA.   Unfortunately not everyone will have the day off.  For those of us who do - we will celebrate the last hurrah of the season. Labor Day officially became a federal holiday in 1894 although the first time it was celebrated was in 1882. As American workers we can thank the labor unions who fought for the right to a 40 hr. work week with vacation and paid benefits.  It cost many their livelihood and even their lives.  Because they cared I get to enjoy the legacy they left behind.  I am grateful.  Will be remembering them tomorrow  - hope those of you who enjoy the day off will remember them as well.  Have a blessed week. Hugs Debbie "They will celebrate your abundant goodness and joyfully sing of your righteousness."  Psalm 145:7 (NIV)
12 comments
Read more 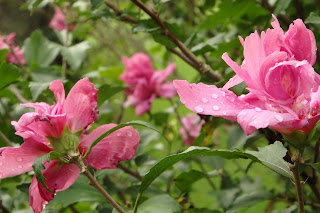 August has started the count down.  Only two days remain this month. Whew it certainly went fast.   Last week the "doggy days" were here.  The temps were in the high 80's and 90's with humidity being up there as well. The Rose of Sharon is still blessing us with a few blossoms but it is winding down as September approaches. The Fritillary moth stopped and paid a visit.  She didn't seem  bothered by the heat. The zucchini continues to be abundant.  Some made it into these delectable muffins.  Is it not amazing how a veggie baked up in a sugary treat takes on a whole different taste? The morning glories are taking over the garden, lawn, and anywhere they so please.  I think they know it is time to spread their glory.   Well dear friends I will leave you for now.  Hope your final count down of August is joyful. P.S. Thank you for all your sweet condolences and comments on the passing of my dear friend. Hugs to Each of You! Debbie "Command those who are rich in
13 comments
Read more 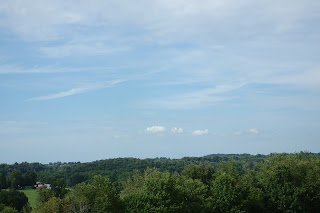 In this life we never know when we will lose someone close and dear to us. This past Friday a wonderful friend was called "Home".  He was doing what he always did driving his tractor and working in the yard.  I am sure that his day most likely started with morning devotions and working on a Sudoko puzzle...then time to go outdoors and work.  After 87 years he had a routine. His grandson of 20 something had stopped to visit while his beloved wife of 67 years fixed them lunch. How could anyone know that a tragic accident was about to happen... the tractor would overturn and crush him underneath.  This gentleman was my Dad's best friend.  In losing him it once again reminded me how truly fragile life can be.   Like many of you I have had to say goodbye far too often in this past year to loved ones, neighbors and friends...one being my dear mom.   Death is a real part of living and we never know when it will be our time or of someone we love. How important to walk and live ea
19 comments
Read more

Butterflies and Other Lovely Gifts 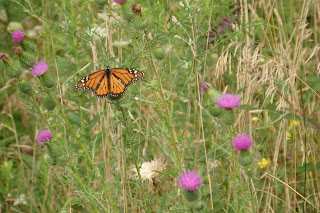 August has brought us butterflies and other lovely gifts. I spotted this Monarch on today's afternoon walk .  Are not these purple thistles a pretty lavender color? The black Swallowtail was gathering his nourishment from the clover as we traveled by. These lilies must have offered the perfect spot to attract another visitor to stop and enjoy a drink. Our peach tree is full this month and gifting us with the sweetest of fruits.   Iron Weed and Golden Rod make such a complimentary duo.  They are two wildflowers that grow together in August's meadow. Speaking of twosomes - Schindler and Shelby are generally close by.  Today's walk was no exception. Thank you for letting me share some of this day's lovely gifts. Hope everyone has a delightful week. Hugs Debbie "As it is written: "He has scattered abroad his gifts to the poor; his righteousness endures forever."  2 Cor. 9:9 (NIV)
11 comments
Read more
More posts